“I don’t feel I like I belong here”, I said while I was leaning on the bar, siping the fourth can of Chang beer.

In two weeks we wrote exactly twenty exams, some about cocktail recipes, some from theory. I was the only student who had absolutely all correct answers from each exam. 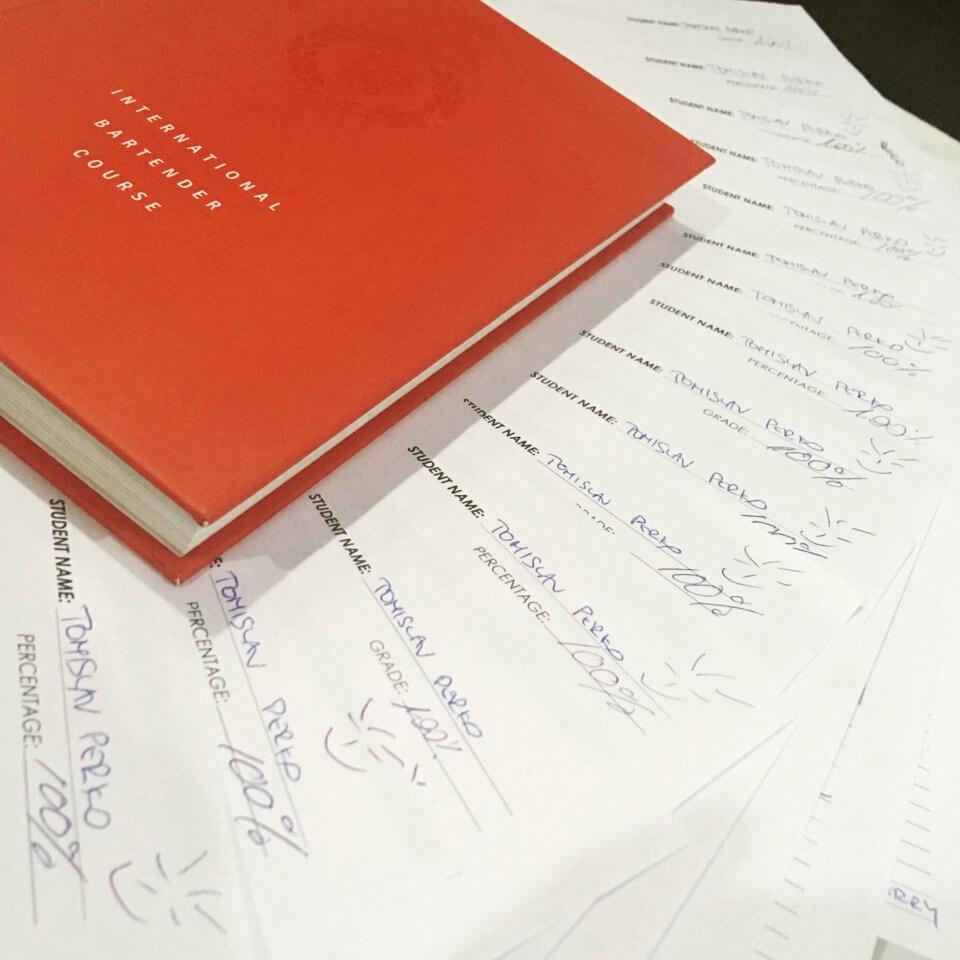 I’ve never found myself in a similar situation. In all the previous schools, my priority has always been to have fun, fit into a cool crew, subtly mess with the teachers, learn enough to pass, and that is it. School – whether it was elementary, secondary, or college – was a polygon for everything except learning. Learning and the knowledge I acquired there was at the very bottom on my priority list.

And study I did. Every day I was listening carefully to the classes, asked the instructors bunch of questions, wrote down notes, and at the end of the lesson I wrote everything over to another notebook. Each day I learned six new cocktails and repeated the old ones. I was so crazy that even now I was sitting on the bar during the rooftop party so I could watch instructors making the cocktails we learned a few hours earlier in the class. Last night I had also watched the Netflix documentary about the sommeliers recommended by one of the instructors as we learned the chapter of wine.

Because of all that, in the last two weeks, I was missing something that was usually the most important – finding a cool crew and having fun. I knew a couple of people, we chatted occasionally, but nothing more than that. I did not care too much about them and vice versa. I even turned the party on the rooftop into a classroom, while my colleagues were entertaining and socialising with their peers from different parts of the world.

No wonder I felt like I did not belong.

“Drink the beer and shut up,” D. grumbled.

“I’m serious,” I said while taking a sip.

“Stop whining” she replied. “You did not come here to socialise but to learn.”

Danny, the most experienced instructor in our school, was just preparing a cocktail behind the bar I was leaning on. He had a colourful shirt, skilfully juggled the bottles, pouring ingredients into the shakers and entertaining people around us. I followed the ingredients he used and tried to guess which cocktail he was making. Long Island iced tea was on the repertoire.

“Up for a drink?” Mark asked. He was my instructor too, a cool Italian guy. He was younger than me, and has been working for a dozen years in cocktail bars throughout the world, and has spent the last two years in EBS as an instructor.

“I’ll pass, but he will certainly have a beer,” D. replied, pointing to me. “He needs some alcohol to drown the sorrow” she said somewhat quieter.

She was very funny.

He talked about his work experience at different bars, travels around the world, about the EBS.

“The work at EBS is great,” he said after I got us another round. “Every once in a while you live at the other end of the world, you have free accommodation and food, it’s fun, and you can earn some money on the side. True, it can be repetitive because every month you teach the same things, but you get used to it. Students are here to motivate you.”

“I know what you mean”, I replied.” I had similar situations in my business too.”

Last couple of years I spent giving lectures at libraries, schools, colleges, travel festivals. I’ve always talked about a similar story of my travels, what I learned, which places I visited. After a while, I was tired to talk about the same story, but inspiration is always found in one and only – in the audience. They are the ones who motivate you to talk as if you are talking for the first time because you are aware that it’s their first time listening to the story.

In moments of crisis I remembered how it must have been to all my school teachers, who had to repeat the same story a couple of times a day. To the kids who were sitting in the classroom most often against their will.

I think this is one of the main reasons why I loved working in bars. Nobody expected me to talk about traveling, where I was and what I was doing there, whom I met, what strange food I ate, what was the most beautiful place I visited, what I learned about life. I was expected to make and serve a drink, maybe exchange couple of words with the customer, and go to the next one. Everything else was a bonus.

And that brought me peace – even though the job was all but peaceful, especially when you have a pile of people waiting in line for your cocktails.

When he was finished with his life story, I briefly told him my own. How I traveled, wrote books, gave lectures. And how now I’m interested in this – bartending and making cocktails.

“You know, I already started to think about what I’ll do after this course,” I continued. “I will enroll in the two-day mixology course here, and I’m also interested in an advanced bartending course. Who knows, maybe I’ll go to New York to finish EBS Instructor Academy.”

“I think it’s a great idea,” he said. “It’s clear to you that you are our best student, and I’m sure you will succeed in whatever you’ll decide that its your next step.”

“And I saw you behind the bar,” he said, before he left us. “You know your recipes, you are great under pressure, you don’t get confused. If you’ll ever need it, give me an hour and find you a job.”

I liked the sound of those sentences.

“What’s up?”, she interrupted my thoughts. “Suddenly you’re glad you don’t belong and that you are the biggest nerd in the group?”

I smiled, took a few more sips, and went into our room as it became louder on the roof.

The next day, while everyone in school went to a two-day trip to the Phi Phi Islands, we decided to explore some of the surrounding hidden places, if there was anything like that at all in Phuket. Luckily, JD, another one of the cool instructors, chose to show us the place that is not the easiest to reach, but is definitely least visited from all nearby beaches. I didn’t remember the name of the place, nor did I try to remember it – maybe I better not know it, to give it a little secrecy of my own.

A twenty-minute ride on a tuk-tuk, half an hour of hiking through the forest, and we were in paradise. 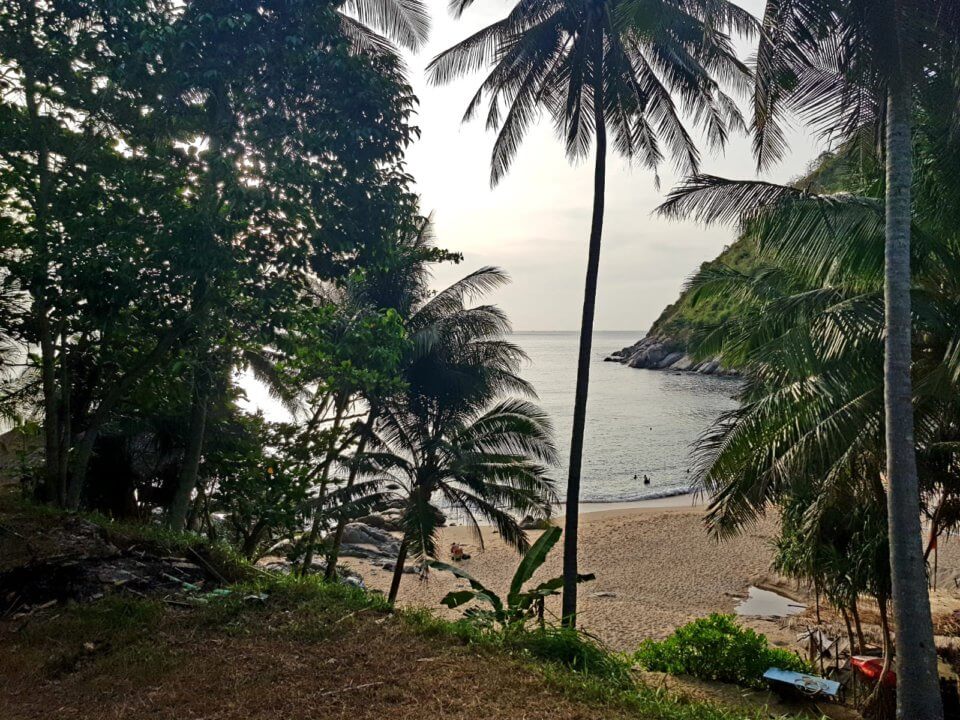 Palms, a natural pool, a large swing, a small sandy cove, huge stones – that was it. Our company were few locals who worked at the bar/restaurant, and maybe some twenty other visitors. 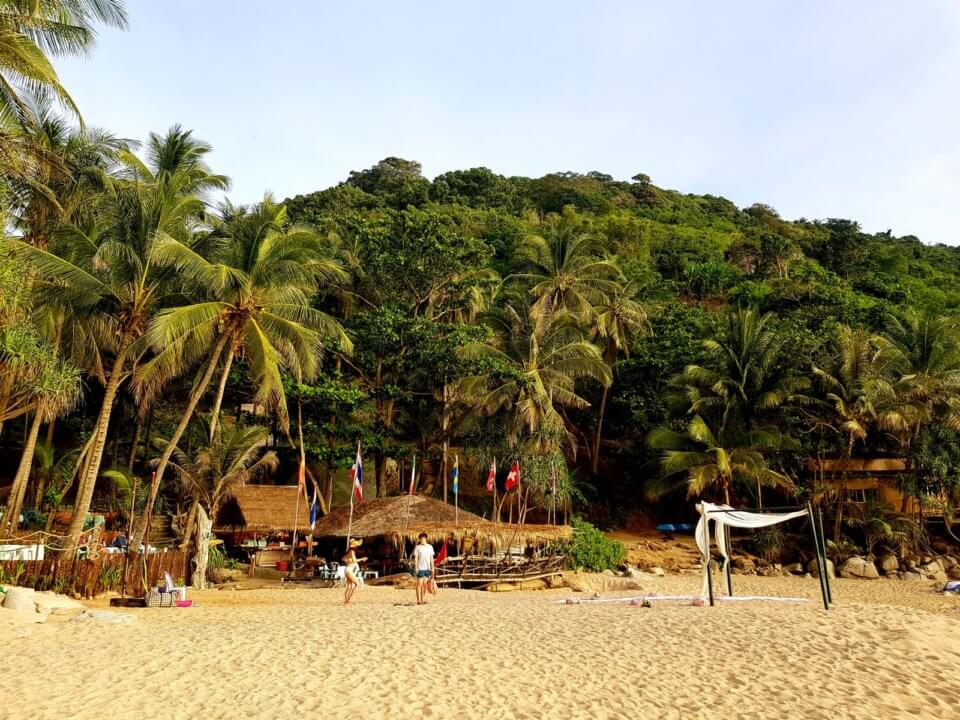 A little bit of swimming, sunbathing, swinging, some fresh fruit juices, and we had to go back to our hotel.

“Masaaaaaaz,” the women invited us, one after the other, in one of many massage salons.

I admired them. There are some massage salons I walk by few times every single day, and they never forget to invite you in, with a smile on their faces. And although I know they repeat that invitation literally a thousand times a day to every passer-by, every time I notice a dose of warmth and hospitality.

And that was great, because they live from tourists, and they know that hospitality is one of the reasons why people will come back. To their country, on their island, in their massage salon. Most likely, their entire families are working in the tourism sector, and they know that everyone is connected – that someone’s negative experience will have a negative impact on all of them.

I was thinking what needed to happen for tourist workers in Croatia to experience tourism in this way. That everybody is warm and welcoming, no matter what. That they enjoy they work. And that they are, of course, appreciated by their employers and guests.

No matter how hard I tried, I couldn’t imagine that something like that is possible, even though its in everyone’s interest – guests would profit, as well as employers, employees and tourism industry as a whole. It was a vicious circle: owners had to deal with high taxes and constant inspections, and they cannot find educated personnel that is honest and loves their jobs; workers have to carry a stigma that job brings (“everyone can be a waiter”), they don’t feel appreciated by their owners because everyone can do that job, often times are cheated and underpaid, and have to deal with irrespective guests; while guests feel like they are overpaying service that is not good enough.

Where should one start with solving these issues?

I wrote down those questions into my memory, and set up alarm clock for 7AM – new week of bartending education is in front of me.

Phuket – the end of the story.